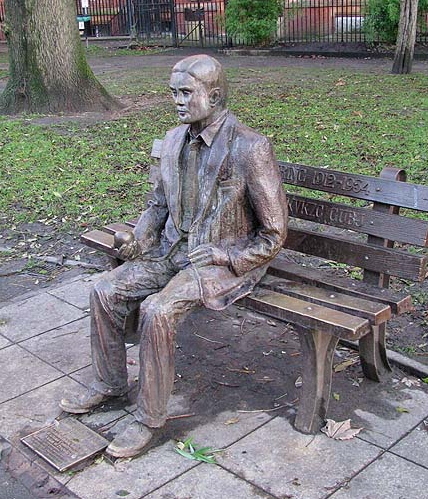 This statue of Alan Turing was unveiled on 23 June 2001 in Sackville Park close to the University of Manchester building on Whitworth Street and Canal Street.

Turing was a mathematician who worked at Bletchley Park during World War II with the code breakers who deciphered German naval codes including uncovering the settings for the Enigma machine. He is regarded as the father of modern computer science and it was at Manchester University in 1948 that he worked on the Manchester Mark 1, one of the world’s earliest true computers.

Turing was gay in a time when homosexuality was regarded as a criminal offence. Despite his outstanding war record and his academic achievements he was outed as a homosexual and subsequently arrested and prosecuted. This ended his career and soon after in 1954 he was found dead by his cleaner. The statue depicts Turing holding an apple because it is thought that he committed suicide by lacing an apple with cyanide.