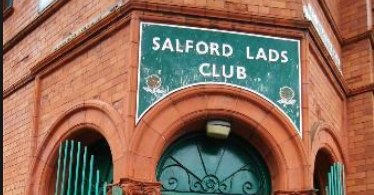 Salford Lads Club is a recreational club in the Ordsall area of Salford . The club, on the corner of St. Ignatius Walk and Coronation Street, was established in 1903 as a boys’ club but today welcomes both boys and girls and organises activities including football, snooker, table tennis , boxing training, dance, community meetings, exhibitions, kickboxing.

The club was opened on 30 January 1904 by Robert Baden Powell, who later founded the scout movement. Former members include actor Albert Finney, footballers Steve Fleet , Eddie Colman and Brian Doyle, Allan Clarke , lead singer of 1960s pop group The Hollies, and Gaham Nash, guitarist, songwriter and singer with The Hollies who went on to form Crosby Stills and Nash.

The building gained listed status in 2003 as its tiled interior is virtually unchanged with original fittings and includes a boxing ring, snooker rooms and a gym with a viewing balcony. English heritage said: “The building is thought to be the most complete example of this rare form of social provision to survive in England.” In 2007, the Manchester Evening News reported that the building, which was used for the sleeve of The Smiths? album The Queen Is dead, came third in a nationwide hunt to find the most iconic buildings in the country.