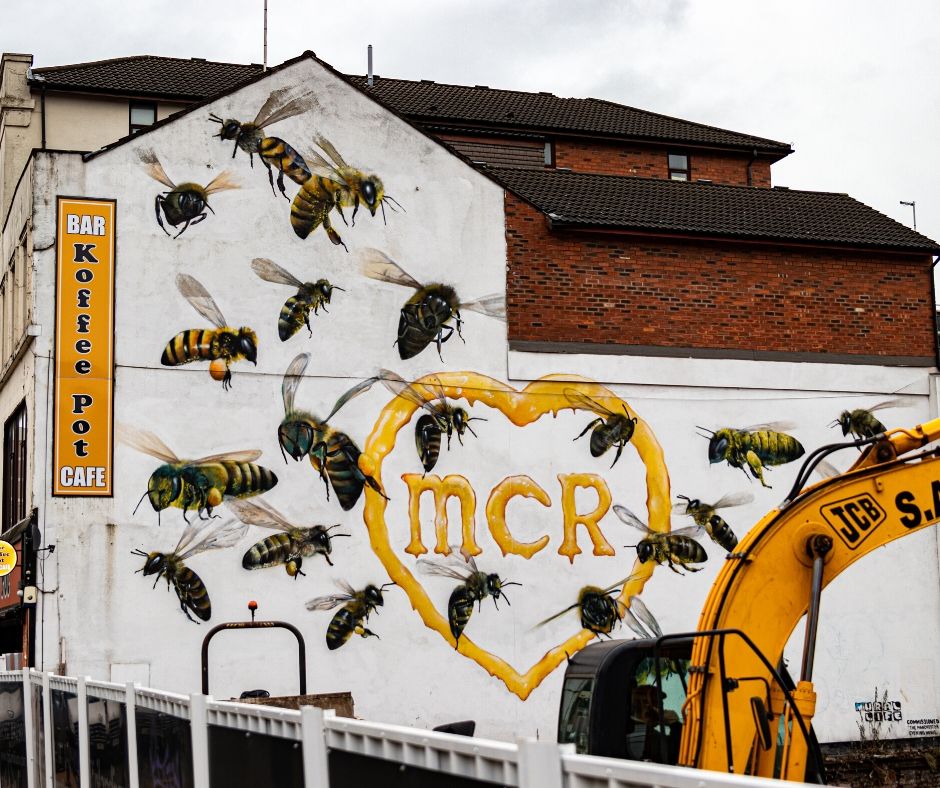 The worker bee is one of the symbols of Manchester and has represented the city for over 150 years.

It represents the amazing work ethic of all the workers during the industrial revolution; this was a time when the city flourished as a hub for textiles and the city was referred to as a bee ‘hive of industry.’ It represents Manchester’s unconquerable spirit.

Where did the Manchester bee symbol come from?

The bee symbol was first introduced during the industrial revolution, at the time, Manchester was one of the cities in the UK leading the charge for industrial change with advancements in economics,political and intellectual life. Manchester in the 19th century was thriving enormously!

The bee symbolised the hard work of every individual making a huge impact to the city during the industrial revolution, the Mancunian factories were sometimes referred to as beehives, because the workers within them were so busy and productive.

An interesting fact about some bees in Manchester, is that back in 2015 there were reportedly 32,000 honey bees living on the roof of The Print works and they have produced a crazy 213 jars of honey, which is remarkable given that they’re living at the top of an entertainment complex in the heart of Manchester. This is where the bee originally came from but now the symbol is more recognised worldwide due to the bombing that happened in May 2017.

The history of the Manchester bee

Back in the 19th century, the Freemasons governed Manchester, they believed that the bee was extremely important as it was the symbol of cooperation and societies can only accomplish difficult tasks when everybody works together.

A man named St. John Chrysostom who was an important early church father and was known for his preaching and public speaking said that the bee is more honoured than the other animals not because of how much it labours, but how much it labours for others.

In the 1800’s, Manchester became such an important city and so relied upon due to its growing textile industry and fantastic workers they had. The city wouldn’t be where it is today without them.

On Monday the 22nd of May, an explosion went off just after 10:30pm as people were leaving the Manchester arena from an Ariana Grande concert. Twenty-two people were killed and more than 50 were injured in this attack, however, some of those involved were children.

This had been the first terrorist attack in the UK since the London bombings in 2005, so when this happened it created a wide range of panic and rightly so. So Ariana Grande organised a benefit concert called, One Love Manchester, where she was the main headline and also many other artists and groups attended to this such as Justin Bieber, Little Mix, Robbie Williams and Liam Gallagher.

The concert was held at the Old Trafford cricket ground in Stretford and was watched by more than 100 million people worldwide and raised a massive £10 million in the twelve hours following its conclusion. Since the attack the bee has been a more significant symbol as it represents the unity of the whole community and beyond during this difficult time.

Many people across the community and throughout the UK added the symbol to their social media profiles, while others even got a tattoo of the bee onto their bodies to show how much it means to them and a constant reminder of what it represents, many shops around the city are now selling products including clothing with the bee embodied onto it.

Amazing artwork and graffiti went up across the whole city and one in particular that sounds out is on the side of the Koffee Pot building, in the heart of the northern quarter, there is an image of 22 worker bees swarming around a honey heart. Each bee pictured represents one of the innocent people that were unfortunately killed in the attack, some of them being children sadly.

Where can you find the Manchester bee?

Around the city of Manchester there are hundreds of bees all in different locations both ginormous bees and also little ones. All of them have been individually designed by the public and there are also a few on the outskirts of Manchester as well, in places such as Wythenshawe, Levenshulme, Didsbury and many more.

This shows how much the attack has impacted the lives of the ones who were affected by this horrible incident and also those who weren’t, as in some towns around the area not only are there bees but also memoriams of those who lost their lives.

The area in particular where the bees attract the most attention are right outside of Piccadilly train station, The Arndale, Town Hall and finally Victoria station as this is the location right near where the incident occurred.

Back in 2018, there was a huge buzz around Manchester when the Bee in the City auction raised over one million pounds at a charity auction. During the summer of 2018 there was a family art trail all through Manchester where the public could find and view all the new art and graffiti of bees around the city.

Many people found hundreds of bees from the hipster area in the northern quarter too its most famous landmarks, this was a great opportunity for the public but also tourists to see what the city has to offer.

The bees that had been designed were then put on a charity auction where all net proceeds went too We Love MCR Charities Stronger Communities Fund. This was so it could bring communities together so they can celebrate diversity and build stronger relationships.

A few celebrities such as ex professional Manchester United football player Andrew Cole attended the event to show their support for such a great cause. 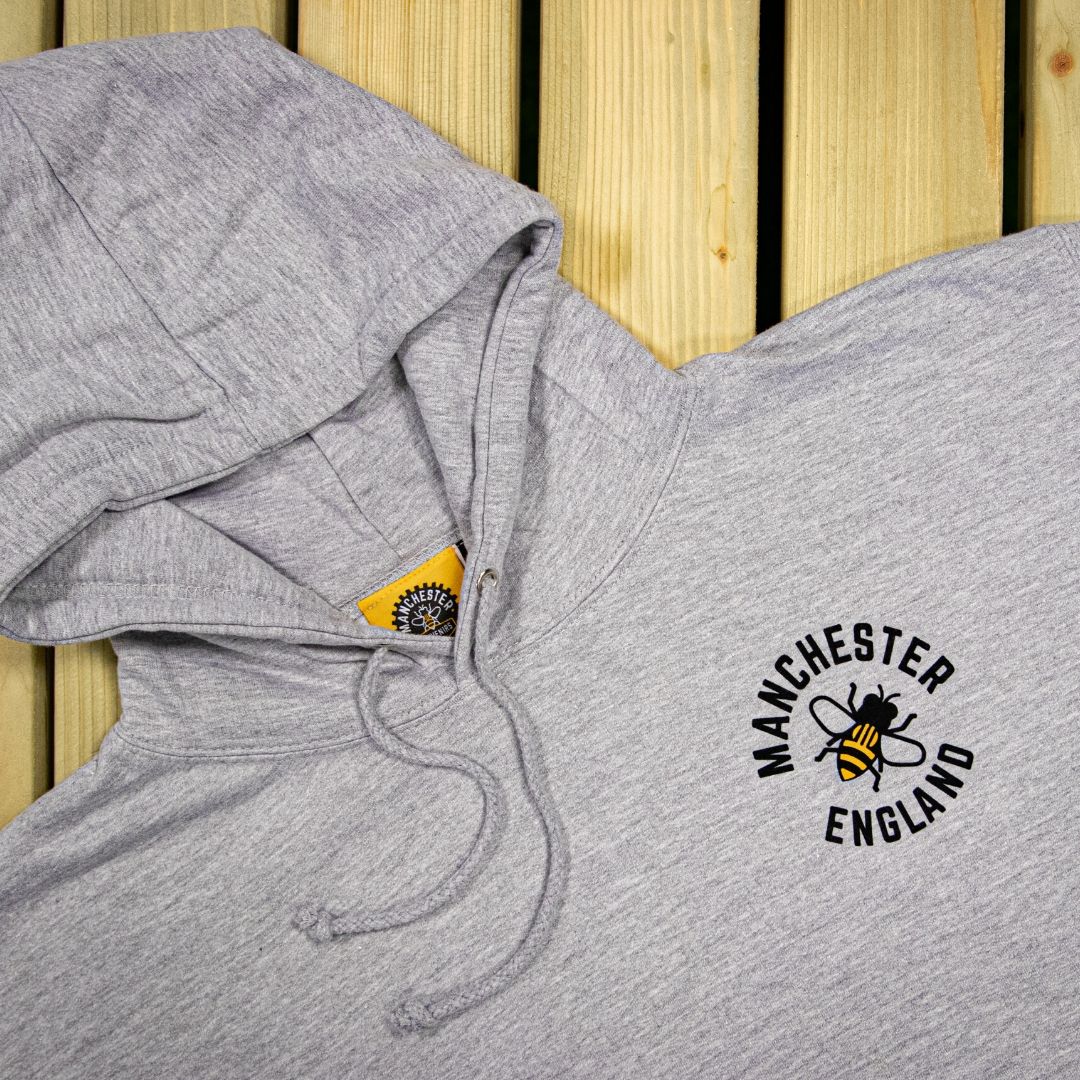 Manchester Souvenirs have created a unique Manchester bee design and you can find it depicted on a wide range of products including t-shirts, hoodies, coasters and tote bags.